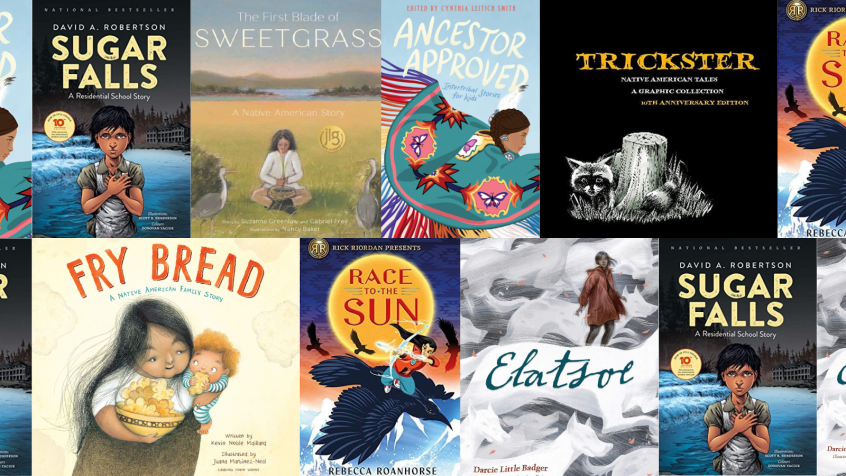 November is Native American Heritage Month, and to celebrate we asked our Youth Department to share some of their favorite reads about indigenous peoples and stories. From picture books to chapter books, both fiction and non-fiction, these reads can be fantastic teaching tools. This month let’s bring awareness to the importance of Native American Heritage Month and celebrate native peoples and stories!

We Are Water Protectors  by Carole Lindstrom
“Water is the first medicine. It affects and connects us all . . .” When a black snake threatens to destroy the Earth and poison her people’s water, one young water protector takes a stand to defend Earth’s most sacred resource. Inspired by the many Indigenous-led movements across North America, We Are Water Protectors issues an urgent rallying cry to safeguard the Earth’s water from harm and corruption–a bold and lyrical picture book written by Carole Lindstrom and vibrantly illustrated by Michaela Goade.

She Sang Promise: The Story of Betty Mae Jumper, Seminole Tribal Leader by Jan Godown Annino
She Sang Promise is the compelling and inspiring story of Betty Mae Tiger Jumper, one of modern America’s first female tribal leaders. With its lyrical, poetic text, and rich, vibrant illustration, this is a book to charm and amaze young readers. Betty Mae Tiger Jumper was born in 1923, the daughter of a Seminole woman and a white man. As a child of a mixed marriage, she walked the line as a constant outsider. Storyteller, journalist, and community activist, Betty Mae Jumper was a voice for her people–ultimately becoming the first female elected Seminole tribal leader.

Fry Bread: A Native American Family Story by Noble Maillard
Fry bread is food. It is warm and delicious, piled high on a plate. Fry bread is time. It brings families together for meals and new memories. Fry bread is nation. It might look or taste different, but it is still shared by many, from coast to coast and beyond. Fry bread is us. It is a celebration of old and new, traditional and modern, similarity and difference. Fry Bread is a story told in lively and powerful verse by Seminole Nation member Kevin Noble Maillard, with vibrant art from Pura Belpre Award winner Juana Martinez-Neal.

The First Blade of Sweetgrass: A Native American Story by Suzanne Greenlaw
Musquon must overcome her impatience while learning to distinguish sweetgrass from other salt marsh grasses, but slowly the spirit and peace of her surroundings speak to her, and she gathers sweetgrass as her ancestors have done for centuries, leaving the first blade she sees to grow for future generations. This sweet, authentic story from a Maliseet mother and her Passamaquoddy husband includes backmatter about traditional basket making and a Wabanaki glossary.

Ancestor Approved: Intertribal Stories for Kids by various authors
Edited by award-winning and bestselling author Cynthia Leitich Smith, this collection of intersecting stories by both new and veteran Native writers bursts with hope, joy, resilience, the strength of community, and Native pride. Native families from Nations across the continent gather at the Dance for Mother Earth Powwow in Ann Arbor, Michigan. In a high school gym full of color and song, people dance, sell beadwork and books, and celebrate friendship and heritage. Young protagonists will meet relatives from faraway, mysterious strangers, and sometimes one another (plus one scrappy rez dog). They are the heroes of their own stories.

Elatsoe by Darcie Little Badger
Elatsoe–Ellie for short–lives in an alternate contemporary America shaped by the ancestral magics and knowledge of its Indigenous and immigrant groups. She can raise the spirits of dead animals–most importantly, her ghost dog Kirby. When her beloved cousin dies, all signs point to a car crash, but his ghost tells her otherwise: He was murdered. Who killed him and how did he die? With the help of her family, her best friend Jay, and the memory great, great, great, great, great, great grandmother, Elatsoe, must track down the killer and unravel the mystery of this creepy town and it’s dark past. But will the nefarious townsfolk and a mysterious Doctor stop her before she gets started? A breathtaking debut novel featuring an asexual, Apache teen protagonist, Elatsoe combines mystery, horror, noir, ancestral knowledge, haunting illustrations, fantasy elements, and is one of the most-talked about debuts of the year.

Race To the Sun by Rebecca Roanhorse
Lately Nizhoni has been able to detect monsters, like Mr. Charles, her dad’s new boss at the oil and gas company. He’s also alarmingly interested in Nizhoni and her brother, Mac, their Navajo heritage, and the legend of the Hero Twins. Nizhoni knows he’s a threat, but her father won’t believe her. When Dad disappears the next day, leaving behind a message that says ‘Run!’, the siblings and Nizhoni’s best friend, Davery, are thrust into a rescue mission that can only be accomplished with the help of Dine Holy People and their weapons. But it will take more than weapons for Nizhoni to become the hero she was destined to be.

Sugar Falls : A Residential School Story by David Robertson
Inspired by true events, this story of strength, family, and culture shares the awe-inspiring resilience of Elder Betty Ross. Abandoned as a young child, Betsy is adopted into a loving family. A few short years later, at the age of 8, everything changes. Betsy is taken away to a residential school. There she is forced to endure abuse and indignity, but Betsy recalls the words her father spoke to her at Sugar Falls–words that give her the resilience, strength, and determination to survive.

Trickster: Native American Tales: A Graphic Collection by various authors
All cultures have tales of the trickster-a crafty creature or being who uses cunning to get food, steal precious possessions, or simply cause mischief. He disrupts the order of things, often humiliating others and sometimes himself. In Native American traditions, the trickster takes many forms, from coyote or rabbit to raccoon or raven. The first graphic anthology of Native American trickster tales, Trickster brings together Native American folklore and the world of comics. In Trickster, 24 Native storytellers were paired with 24 comic artists, telling cultural tales from across America. Ranging from serious and dramatic to funny and sometimes downright fiendish, these tales bring tricksters back into popular culture.

(Summaries provided by publisher of each book)