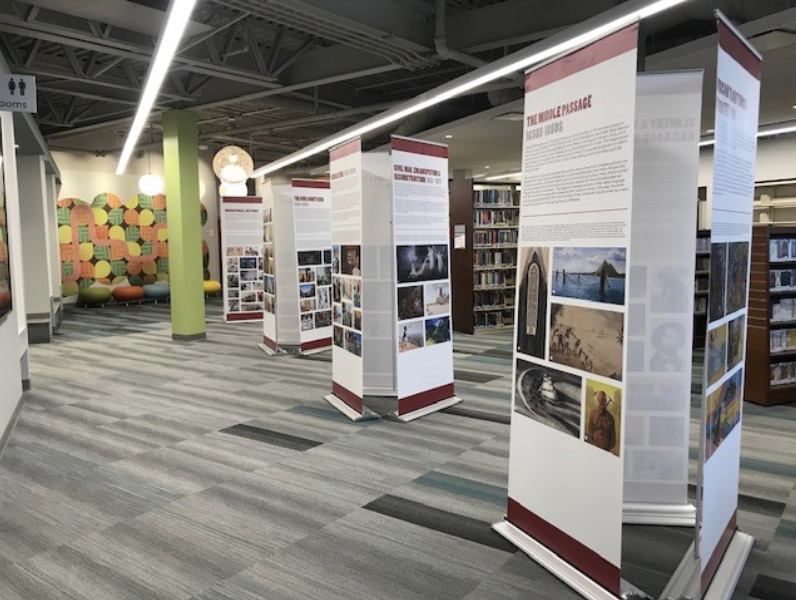 The Traveling Panel Exhibition, featuring 12 panels with 120 reproduced illustrations, supports the introduction of educational resources and programming opportunities surrounding African American children’s picture books. The exhibit specifically aims to raise greater awareness of African American illustrators and authors, bring attention to the topic of social justice throughout African American history, and teach the importance of appreciating the culture and history of a people who are deeply rooted in the American story.

After visiting the exhibit, be sure to stop by the Children’s Department and browse our many illustrated titles by African American authors. Need a few ideas about where to start? Keep an eye out for these new books and award winners:

Ben and the Emancipation Proclamation. Written by Pat Sherman. Illustrated by Floyd Cooper. Eerdmans Books for Young Readers, 2010.  This beautifully illustrated tale is about a young boy named Ben, a slave in Charleston, South Carolina around the time of the civil war. The story follows Ben as he teaches himself how to read, despite it being illegal for slaves to read or write. A heart-wrenching story of hope, it’s a look into the life of a young black boy in 1863. Both children and parents will be moved by this book.

Henry’s Freedom Box: A True Story from the Underground Railroad. Written by Ellen Levine. Illustrated by Kadir Nelson. Published by Scholastic Press, 2007. This book is based on the incredible true story of Henry Box Brown, the man who mailed himself to freedom. The story focuses on the heartbreaking separation of families due to slavery. When Henry’s family is sold to a different master and taken away from him, he decides to take his life into his own hands and mail himself north to freedom.

Freedom School, Yes! Written by Amy Littlesugar. Illustrated by Floyd Cooper. Published by Philomel Books, 2001. Another beautifully illustrated book by Cooper, this story follows Jolie and her family who have taken in the new Freedom School teacher in their small town. It’s a story about the perseverance and bravery of a town of people looking to make better lives for their children through education.

Ruth and the Green Book. Written by Calvin Alexander Ramsey with Gwen Strauss. Illustrated by Floyd Cooper. Carolrhoda, 2010. This simple story follows Ruth and her family as they embark on a several days long road trip from Chicago to Alabama in the days of Jim Crow. It’s a look into the challenges faced by black Americans as they traveled across state lines never knowing whether the people they met would be friendly. The book also includes a history lesson on “Green Books”, books that listed black-friendly establishments for travelers during segregation.

Heart and Soul: The Story of America and African Americans. Written and illustrated by Kadir Nelson. Balzer + Bray, 2013.  An inspiring and emotional chapter book about the history of race in America, this story is told through the point of view of a one-hundred-year-old African American female narrator. The story flows all the way from the civil war to the freedom marches of the 1960s. This beautifully illustrated book is appropriate for older children (nine and up) but most adults will learn something too, and anyone can appreciate the lessons to be learned from its pages.

The Telling A People’s Story exhibit will run from the beginning of February to the end of the month and is free to experience. Thanks to a generous grant from the Martha Holden Jennings Foundation in Cleveland, OH, the Miami University Art Museum is pleased to bring the content of the original exhibition to elementary schools, public libraries and other educational institutions.