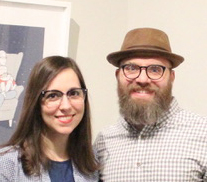 Daniel comes from a family of storytellers who love investigation and creativity, introduced and encouraged into creative outlets at an early age, Daniel has never forgotten the lessons of craft from his mother who was a basket maker and a calligrapher and the lessons of engineering and risk from his father. Daniel received an undergraduate degree from the University of Florida in printmaking and a masters degree from the University of Georgia also with an emphasis in printmaking. Between the two programs, Daniel lived in downtown Washington D.C. and trained as a furniture maker under woodworker Dennis Sitka. Currently, Daniel is an Art Professor at Georgetown College in Georgetown, Kentucky. He teaches courses in sculpture, printmaking, 3d-design, woodworking and metal casting. Daniel currently resides in Georgetown, Kentucky with his wife, Holly, His daughter, Olive, his son, Thatcher and their dogs Clover and Cricket.

Holly, originally from Virginia, grew up drawing and creating. She attended college at Longwqood University where she received her BFA. Holly also managed a prestigious portrait studio in Virginia. After marrying her husband, Daniel Graham, and moving to Georgia, she worked as an executive assistant for an art collective where she also directed and curated an art gallery. The year 2006 brought Holly and her husband to Georgetown, Kentucky. She was employed by the Georgetown News-Graphic before she became a stay-at-home mother. Currently, she homeschools her two children. For Holly, 2017 signaled the advent of reclaiming her passion for drawing as she focused on putting forth her illustrations to the public. She and her husband wrote three children’s books that she illustrated. Her work has appeared in art markets in Lexington, Berea and Louisville as well as area art exhibitions. Holly greatly enjoys the fulfillment brought about by taking something inside of her mind or her heart and putting it onto paper or other tangible forms.