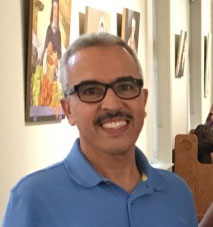 On June 4, 1959, Beggar Abdelaziz (Abdel) was born in Casablanca, Morocco, the economic capital of Morocco. He graduated from Casablanca University. Abdel was a banker for 30 years. In 2014, after early retirement from banking, he moved to Georgetown, Kentucky.

Abdel began painting and showing his work in his home country between 1990 and 2013.  Since moving to the United States he has shown his work at the Scott County Public Library in 2017.